This is not an anti-Apple rant. I love my iPad. It's the device I pick up the moment I get out of bed in the morning. While drinking my coffee I check my emails. While on the toilet I check my twitter feed. While having a cigarette I read Hacker News. While taking my dogs for a walk I listen to Today on iPlayer. While at work I project content to students via AppleTV. When I get home I play Plants vs Zombies with my son. While marking students' work, I'll watch some film or TV series on Netflix.

You can take my iPad out of my cold dead hands.

Now go back and read that first paragraph. What do I do with my iPad? I use it to view content and communicate. iPads, and any tablet, are great for this. I do not use my iPad to create anything.

I've tried. Honestly I have. I've downloaded apps to make videos, code in Python, create presentations and write blog posts. I've excitedly shown friends and colleagues how easy it is to knock up a Keynote presentation, or make Khan Academy style tutorials using various apps. I've even purchased a stylus and tried using it as a notebook only to discover that my writing is illegible unless my characters are at least three inches high. As time goes on, the apps I've downloaded to 'aid' productivity get used less and less, and I find myself firing up my MacBook whenever I want to do any serious work. I got sick of finding workarounds to get over the restrictions of the OS; transferring files along a chain of apps or even emailing them to myself. I now have a simple policy for managing my apps. If an update comes through, and I haven't used the app in more than a month, I delete it. This is what my home screen looks like. These are the only apps I have. 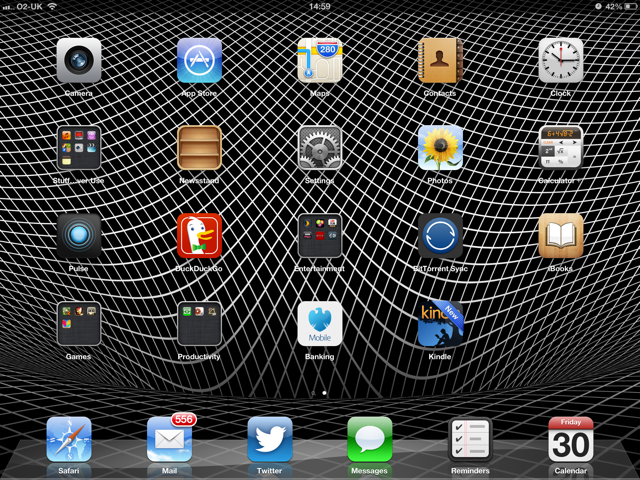 I read this Guardian article (on my iPad) and I'd like to spend a little bit of time explaining why mobile computing, in its current form, is not going to take over the world.

The statistics that are quoted in the article, along with fancy looking graphs, are all for GPC sales. This is important. They are not quoting GPC usage. If you want some statistics on usage, then check out this screen-shot for the analytics of my blog.

When you buy a computer you tend to expect it to last a few years, and you tend to just buy one or maybe two for an entire household. This is not the case with mobile devices. Along with every member of my family over the age of eleven, I am on carrier subsidised mobile contract. We upgrade our phones regularly. So just looking at my household, you have a purchasing pattern of maybe one computer every five years and four mobile devices every two years.

I use a third generation iPad (screw Apple's ridiculous naming policy). My son uses a first generation iPad. This is a device that is barely three years old and has already become obsolete. Even typing on the thing is a pain, as the OS has advanced beyond the hardware and it takes what seems like seconds for the key presses to register. The last few apps that I've tried to download for him won't run on the OS and those that do tend to crash pretty often. I should think that most people that purchased a first generation iPad that can afford to, have already replaced it with a later one.

Is it any wonder that the sales of mobile devices are so high? Mobile devices, in my opinion, are like disposable computers. They're designed to be that way. You use it for a couple of years, it becomes obsolete, and you buy a new one (all with a nice carrier subsidised contract so you don't realise how much money you're actually spending). I think this is in part due to the manufacturers' policy and in part due to the rate at which technology is developing. Apple and Samsung are constantly innovating, bringing out better mobile devices each year that consumers want to buy. At the same time, they have no desire to ensure that a two-year old device is as functional as the day you bought it. We've been tricked into accepting this business model in a way we would never accept with our GPCs. A three-year old computer will still run the latest operating systems and software, so we don't need to upgrade as often. Most households now already own a GPC, so is it any wonder that sales have flat lined.?

Convergence I think is important, it's just that the big manufacturers have got it the wrong way around. They've taken the sales of mobile devices and made an assumption - everyone wants mobile and people aren't buying PCs. Apple and Microsoft are pushing to make our GPCs more like mobile, in the misguided opinion that this is what people want. It's not. Windows 8 is a prime example of how this tactic has failed, it's a God awful OS that nobody wants. I hope Apple have paid attention to this. Imagine if the next iteration of Mac OS stopped you from installing apps from outside the App Store, removed the terminal and locked away your file system. How many of us would upgrade then?

No, the correct style of convergence can be seen in Canonical's attempt at launching the Ubuntu Edge. The crowd funded campaign failed, but I think it gained significant enough numbers of pledges to show that this is what many consumers want. We want a GPC that we can carry around in our pockets, SMS our friends with, post to Twitter with and browse the Web with. Then, when we need to do some work we can plug the thing into a monitor, link up a Bluetooth keyboard and get on with some real productivity.

I've seen a worrying number of articles about schools who have bought into the mobile craze. They're making the assumption that current mobile technologies are the future, and that they need to jump on the bandwagon as quickly as possible. This is of course only part of their reasoning. Any school that's offering free or subsidised iPads has a competitive advantage over neighbouring schools, not in terms of results, but in terms of bums on uncomfortable plastic seats. Schools are paid per pupil, so getting feet through the door is important, and nothing is more attractive to a student than the ability to use Instagram during their History lessons.

I think that in a few years time this will cease to be a topic of conversation. I think we will see convergence of personal computing devices in the right direction, and I'll own a pocket-sized GPC with a user interface that doesn't inhibit my ability to create content. We need to keep in mind that mobile is still young, and it should not be assumed that that iOS and Android (operating systems that are only six-years old) will be the future. And if you're the Head of a school, please think twice before jumping on the iPad bandwagon, there's better uses of public money.