So I've had an idea. It might very well be the worst idea ever, I can't really judge as I'm naturally biased - I think all my ideas are amazing. 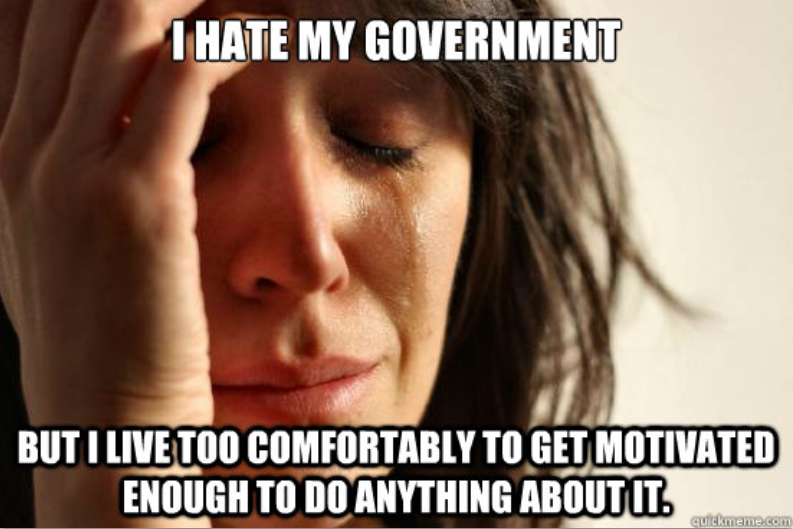 I'm unhappy about the current political landscape. In England we have a choice between three parties; Conservatives, Labour and Liberal Democrats. Realistically, you will end up being represented by a Member of Parliament (MP) from one of theses parties (voters in Scotland, Wales and Northern Ireland have a couple of more options).

In truth, the policies of the 'big three' don't really seem to affect me very much. I'm a teacher by trade and I'm probably more or less a typical middle class, mode income, median family-size and mean citizen of the UK. No matter which party gets into power, life continues as normal. If I were living on the poverty line or if I were a millionaire, then I might be incentivised to favour one party over another, but I'm in neither situation.

I care about technology.

I care that GCHQ has the ability to store and read my emails, view my browsing habits and monitor my telephone conversations. I care that my government is trying to fashion a sanitised Web, where it is considered subversive and perverted to view websites that aren't prefixed with the domain telegraph.co.uk. I care that you can face extradition and life imprisonment for accessing a US Federal computer or running a website that leaks sensitive documents to the world. I care that it's okay for me to give a dog-eared copy of Nineteen Eighty Four to a friend, but if I try to do the same with an ebook purchased from Amazon then all of a sudden I'm a criminal. I know these are First World problems, but I live in the First World.

I don't want to put a cross in a box next to the name of any candidate that comes from any of the three major parties. I watched William Hague stand up in parliament and talk about PRISM, and not a single member of the house gave a serious challenge to what he said. I've read article after article on how ISPs will be forced to introduce filtering on their networks, and not seen a single objection from the party in opposition. So what choices are left to me?

There are a few fringe parties, but they tend to field representatives in only a few constituencies, and most certainly not in mine. There's a single protest party, the UK Independence Party, but UKIP and I don't really see eye-to-eye, due to the fact that I am married to a naturalised British citizen and together we have three mixed-race children. There's the Pirate Party, but again they don't run in my constituency. Besides, they have a silly name and their focus seems to be solely on 'sharing culture' at the expense of everything else.

What we need in this country is a protest party that campaigns on the issues of Internet privacy, censorship, copyright/patent reform and computer misuse laws. Most importantly, the party needs to have representation in every constituency in the country. It's no use gaining a few hundred votes in Manchester and a few hundred votes in Bethnal Green. The party needs thousands of votes nationwide. That way a message can be sent to those in parliament that people care about these issues. 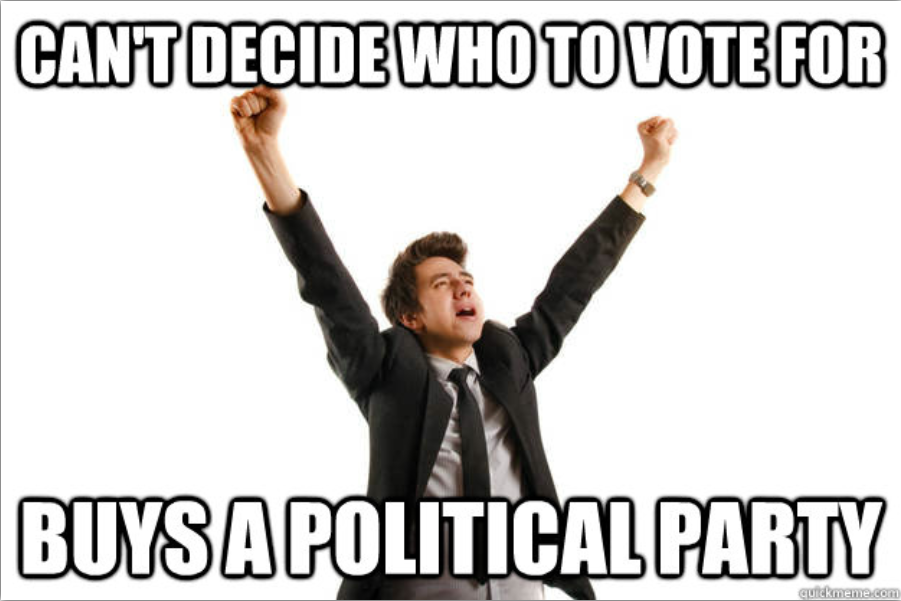 Confession time. The solution is not to "Kickstart a revolution", but that sounds so much better than "Crowdfund a Protest Party". There are a lot of people that care about the impact of politics on technology, and many of these same people also like crowdfunding.

There are 650 constituencies in the United Kingdom. The deposit required to stand in an election to the House of Commons is £500. So a quick calculation reveals that the total cost to any political party wishing to field a candidate in every constituency is £325000. Now I've done some fairly hefty research and it appears that the only other cost is a £25 fee to register a new party. So the absolute minimum funding required stands at £325025.

Kickstarter won't allow crowd-funding of political parties from what I can gather.

Kickstarter cannot be used to raise money for causes, whether it's the Red Cross or a scholarship, or for "fund my life" projects, like tuition or bills.

Indiegogo has no problem with it though. Indiegogo charges a 4% fee on successful campaigns, so that needs to be factored into our target. We'll need £338,568 in order to pay Indiegogo, and have enough left to register the party and then pay a deposit for a candidate to stand in every constituency in the UK.

Reward structures could be fairly simple. £5 lists you as a party founder on a website and a chance to vote on the name/emblem of the party. £25 gives you automatic membership to the party and a vote in the selection of candidates. £500... wins you The Internet?

There are a few administrative roles that need filling. We'd need a Party leader, a Treasurer and a Nominating Officer. They would come from the party membership and be elected by the party membership. These would be volunteer roles, but, if various stretch goals were reached, there could be funding to pay for the time they dedicate to the party.

Campaigning would be centralised. We'd harness the technical skills of the party membership to create a website and maybe a few YouTube videos. We'd promote the party on social networks, keeping the message alive until election day. There should be no need for local campaigning. I've never had a politician knock on my door to discuss who I'd vote for, but I have had plenty of leaflets and fliers put though my letterbox and they end up straight in the recycling. I do, however, pay attention to my Twitter stream, to the blogs I read and to interesting posts my wife shares with me from her Facebook feed.

There should be no need for a manifesto either. In reality, it would be a hindrance. We could draft policies on reforming privacy laws, censorship, copyright law and patent law, and that would be it. We'd have no intention of winning any seats, and realistically we'd have no chance anyway. The point is to provide voters with a 'None of the above' option, but with a clear message as to why 'None of the above' is being chosen. Having policies designed to fix the looming pension crisis, or on welfare reform would detract from our message and probably generate a significant amount of infighting. We need a party that you'd feel happy to vote for no matter where you lie on the political spectrum.

I don't know whether this is a good idea or not. I suppose that's why I'm asking here for your opinions. This post could fade with time, unread and ignored. Maybe it'll be read and I'll be shot down as a fool with no understanding of politics. Or maybe I'm on to something. Feel free to comment anyway, either below or via my twitter handle @coding2learn

I'm happy to modify and update this post in response to your comments.